WALTER WHITE has emerged with a personal voice on both trumpet and flugelhorn. His playing is darkly incantatory, furiously intense, risk-laden, harmonically astute, rhythmically free, with roiling passion tempering a sharp intellect. His bands play solid originals and his own exciting arrangements from both the standard jazz and classical literature.

Walter White grew up in a musical family near Detroit, MI, which inspired him to begin his musical career. Walter’s expressive trumpet playing led him to collaborate with many of the top names in music including Bob James, Maynard Ferguson, Dave Holland, the Mingus Big Band, the Detroit Symphony Orchestra, the Lincoln Center Jazz Orchestra with Wynton Marsalis, and Arturo Sandoval.

Walter’s playing has enhanced the sound tracks of records, movies, and television, including network sitcoms, TAXI, and The Cosby Show. As a recording studio owner, Walter produces music for records, television, and film. In 1994, Walter produced the Walter White Long-tone Accompaniment, a play-along CD for music practice, now in its fourth printing, which continues to be used worldwide after 26 years. A Walter White Long-tone Accompaniment Volume II was released in 2019. Walter White is Brand Ambassador for Robinson’s Remedies Lip Renew, a revolutionary lip product that enhances trumpet, brass, and wind instrument performance. Walter White is a Yamaha Artist & Clinician and is active as an educator, teaching privately and holding master classes and clinics across the country and abroad.

“Heaping helpings of brash and boisterous brass reigned supreme as the accomplished trumpeter, composer, arranger Walter White led a massive big band through originals and wonderfully re-imagined jazz standard arrangements.
On the heels of an aptly titled new recording, “BBXL,” White showcased his uncanny chops taking the melodic lead and soloing on trumpet and fluegelhorn. A protégé of the legendary trumpeter Maynard Ferguson, White as usual replicated Ferguson’s soaring and sinister high-register notes. White’s full bandwidth, low-to-high, was best displayed on his original composition, “The Way Up.”
White has gelled as a composer and arranger, ingeniously reworking classics such as Herbie Hancock’s “Cantaloupe Island,” Horace Silver’s “Nica’s Dream” and Jerome Kern’s “The Way You Look Tonight” for the super-sized treatment.
Marking the 100th birthday of the late pianist Dave Brubeck, White’s hard-charging chart of “Blue Rondo A la Turk” shifted speeds from swing-time to the fast lane exploiting 15-plus trombones, trumpets, saxophones, and a tuba exchanging solos and culminating in a rapturous full-ensemble crescendo.”

wrote my first arrangement for a big band when I was fourteen and have been hooked ever since. I’m excited to finally begin documenting some of the many charts I’ve written over the years; some as recent as a few months ago, others that have been in the book for twenty years.

I have many other musical avenues I plan on going down but the big band has always been a major part of my musical life. I was inspired by touring and recording with many of the great artists and big bands, especially the late jazz trumpet icon, Maynard Ferguson, who I arranged Nica’s Dream for but he never recorded.

I started by creating recording templates for each song using Sibelius music notation software and ProTools recording software. A midi file from each arrangement was exported from Sibelius and imported into ProTools where virtual instruments were assigned to all the tracks. I created mock-ups of each song using virtual instruments then gradually replaced the virtual tracks with real musicians, starting with the rhythm section. I initially recorded all the trumpet section parts myself and utilized many different studios in the process of tracking the trombones and saxophones. I got tracks from other musicians they recorded remotely and also traveled with a high-end microphone and audio interface to record solos and overdubs in dressing rooms, apartments, and hotel rooms. After I finally had everything collected, I spent several months editing and mixing!

All live performance dates on hold. I’m currently a virtual Artist-In-Residence with the Rutgers University Jazz Ensemble I. On Friday, January 8, 2021, from 12:00 PM – 12:50 PM, I will be presenting “Record, Edit, Send, Get Paid: From Anywhere” at the Jazz Educators Network’s 2021 (virtual) conference. In April I’m scheduled to be Artist-In-Residence at Tulsa University.

I have come to be known to perform at an extremely high level. My arrangements are modern, exciting, and un-typical. My trumpet playing is unique in that I’m an accomplished improviser and can play strong high notes.

I usually am so busy with projects, I have only been listening to music related to what I’m working on. When I do have time, especially driving, I try to stay current and hit’ scan’ on the radio and listen to a tune on each station. I also have been checking out The Mingus Big Band and a lot of my colleagues; Conrad Herwig, Alex Foster, Wayne Escoffery, Alex Sipiagin, Randy Brecker. I also love to go down the YouTube rabbit hole and pull up classic tracks and performances; everything from John Abercrombie to Led Zeppelin.

Besides music, my main passion is cooking. I especially love preparing Indian food, Vindaloo, in particular. I also love preparing barbecue, sushi feasts, pizza from scratch, and improvising with Italian sauces and dishes.  I’m also passionate about health and wellness.

I’m working on the Spring release of a couple of new records; The ‘Conscious Man’ project with Mexican pianist/composer, Jose Luis Barajas, and the second installment in my full-size big band series, “BB XL II”.

Thanks for an awesome interview, Walter White 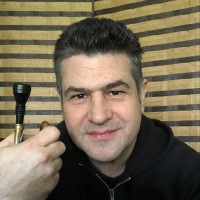