Catching up with Todd Morse

Well, I’m twenty years touring, and recording veteran. I’ve always been a songwriter and wrote a ton of punk rock songs with H2O before joining up with Juliette Lewis and that brought my writing closer to my heart. We wrote more soulful, bluesy and even funky stuff. That’s what came out when I started writing my solo debut “Late Bloomer”

It’s the first thing I’ve done that’s all me. With the exception of “Chemicals” which I co-wrote with my friend Barry Pointer. People who know me from my punk rock origins will be surprised to hear the influences on Late Bloomer. Tom Petty, The Rolling Stones And The Clash to name a few. It’s a fun, groovy record for a day at the beach or a road trip.

I was already making a living in music but something was missing. Over the years I saw the record industry slowing down and it got harder and harder for new music to breakthrough. That kept me hesitating but I needed to try.  If only for my own sanity. I had been writing and recording songs that I wasn’t doing anything with.  It’s just something I needed to get out into the universe.

I wrote and recorded all the demos in my tiny home studio in Hollywood and then I added in my drummer Daniel Thomson. I wanted to allow myself to write each song in a slight genre or style. All while keeping the same tones and vibe. Like The Clash did on London Calling. The Stones would have a country song and a disco song on the same album. I miss those kinds of records. After that, it was jumping around from studio to studio with my producer Chris Wonzer trying to get it done on a minimal budget. There was no label or outside money involved.

I am currently on the road with The Offspring and they have a new record finished so I’ll think I’ll be too busy for a solo tour any time soon. Hopefully, I’ll do some support gigs and festivals during my time off from the road. I’m also talking to some folks about a live stream performance at some point.

That’s a good question. I’ve always thought that great songs define an artist. It doesn’t matter if you have face tattoos or long gray hair and wrinkles. I know that it takes more than that these days so defining my “brand” has been a bit difficult for me. I have noticed that many people can relate to the late bloomer concept. If I can continue to inspire folks to go for there dreams at any age then I’m happy with being my unique proposition. Ageism is real and people need to get over it. I’m not reinventing the wheel with this music but I hope I can make them dance and have a good time.

I seem to always go back to the classics. I discover something new every time I listen to older Stones and Queen records. You’ll always hear reggae music playing in my house as well. Toots And The Maytals is one of the all-time favorites. Recently I was listening to Rage Against The Machine’s self-titled debut. I love that it was recorded live and most likely without a click tempo as it appears to pick up and slow down in different sections. That’s how humans are supposed to sound! Just like our heartbeats can go from at rest to racing in seconds. I was lucky enough to play with Brad Wilk (RATM drummer) on a tour with Juliette And The Licks and the music felt alive. As far as more recent stuff I like Alabama Shakes, Vintage Trouble, and The Struts. I could see myself opening for any of those bands.

As I mentioned earlier, The Rolling Stones, Tom Petty And The Heartbreakers, The Clash, Bob Marley, Queen, The Ramones

I guess I’m a simple guy. My family and my music are my only true passions. I have an amazing wife and two healthy and beautiful daughters who have to inspire me to go beyond anything I’ve previously done in my career. I’m also passionate about staying healthy. I’m a vegan and I exercise every chance I get. It’s part of being a late bloomer. I still have so many things I want to accomplish. I tell everyone that I plan on living until at least two hundred so I”m still just a kid.

I’m going to be doing a bunch of touring with The Offspring. I’m currently in Europe and we have Canada and South America tours coming up. In addition to that, I’ll be doing a few shows with my cover band Petty Cash. We do Tom Petty and Johnny Cash covers and it’s a blast. It’s all the guys from Juliette And The Licks. 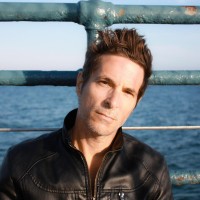