Will HDN Cujo “On My Own” take him Up and Away ?

San Antonio, Texas — Friday, February 19th, 2021 — Upstate NY, is arguably one of the most overlooked geographics that’s making noise in the industry. Known for its distinct melodic/conscious sound, the Niagara Falls/ Buffalo area has been spawning hitmakers who the Hip-Hop lovers across the Internet have yet to familiarize themselves with. Standing at the forefront of Upstate NY music scene is none other than HDN Cujo.

He emerges from one of the silenced out and dangerous cities in America, to become one of the most underrated rappers of 2021. Cujo’s success story is quite different, battling through trials and tribulations to get where he is now all on his own based on his recent release “On My Own”. Although, he emphasizes that there is still much room for growing and no time to relax.

Describing his childhood, HDN Cujo stated “it was really hard. It was just me my mama and my siblings in the projects, I only got to see my dad on the weekend. I grew up in the trenches, used to gun violence and things like that.” Despite its commercial success in sports like the bills, and Buffalo can be treacherous to those not residing in the higher class of the industry. “A lot of people dead, in jail, or got family that ain’t never coming home.” HDN Cujo further talks about how the artists who came before him tend to not remember where they came from. Before propelling themselves to popularity, artists such as Benny the Butcher are amongst some of the first, and biggest names, to make it out. However, Cujo talks about how no matter how much fame he accumulates over the years, he’s going to rep 716 forever.

Amongst various other accomplishments, Cujo is easily recognized for his versatile catalog and credits. “One day after releasing this video, it’s like the end of 2020 and my dads friend Stretch said he could get me on BET and I took that chance because I wanted to blow up and show the world that I can do it. Since I was feature on BET JAMS I have gotten a lot of industry connects and DJ’s wanting to play my music a lot.”

Getting into 2021 Cujo has a lot in store with his potential. Look forward to a lot of videos and much more this year. Stream “Broken” out now on all platforms as well as cop the latest HDN attire on Hdncujo.com 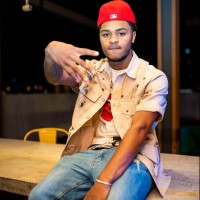