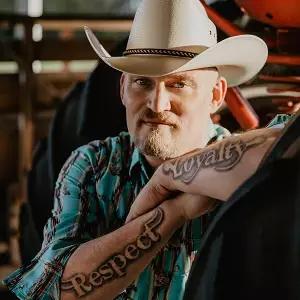 Wallduern, Germany – March 11, 2019 – Country music has always been regarded as an American sound bred in the southern regions, but if fans have learned anything from the likes Keith Urban, country music can come up from anywhere in the world. Which leads us to the German cowboy himself, Rob Georg.

Like many, Rob Georg wrote out a bucket list and on top of catching a plane from Germany to Nashville to work on his vocals. In the middle of crossing that item off the top of his list, he met singer-songwriter, Kristin K. Smith. Encouraged by her words and moved by her actions, Rob Georg started to record and publish music. Under her guidance, and with the help of a handful of other talented folks, Rob Georg started down a musical path and never looked back. That was in June 2018. Now he’s five songs deep, including his latest releases, the country ballad “Carry The Wind” and “Dust.”

Very few would imagine a cowboy from Germany, but Rob Georg just doesn’t wear the label, he lives the lifestyle. He spent the first chapter of his life as a professional equestrian athlete. Today he is just a simple man with a song in his heart that lives on a ranch with his eight dogs, 50 sheep, and almost two dozen horses. His songs are a reflection of the life he leads and the stories he lives to tell. All in true country fashion.

“Carry The Wind” and “Dust” were the first of many heading fans’ way in 2019 and they aren’t the last. In the coming months, Rob Georg plans on releasing five more new singles including “Ghost,” “Time For Some Ink,” “Sunsets at the Ranch,” “Beast of Steel,” and “Harvest Moon Heart” between May and October 2019. With his previous releases, he was able to land in rotation on one of Europe’s largest internet radio stations, Raute Musik FM. He has also charted in the US. He’s currently in the Top 40 on National Radio Hits with “This Ain’t My First Rodeo,” and has cracked the top 100 on the Top100 Charts, the top 30 on the Country Internet Main Chart, and the top 10 on the AC US Western Region Charts. Robert has also been featured in Stereo Stickman, The Bandcamp Diaries, Ratings Game Music, Fresh Out of the Booth, and more. So there is no telling how far his new releases will go.

Those interested in reviewing Rob Georg’s music, featuring him on their playlists, or interviewing the German Cowboy can reach out via the information provided below.

About:
Rob Georg is the German cowboy ready to rock the states with his country music throughout 2019.