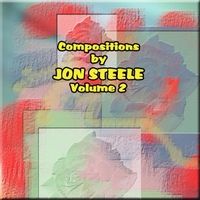 Hermitage, Pennsylvania – March 26, 2020 – An Air Force veteran with 38 years behind him and even more ahead, Jon Steele is focusing on not only his 2019 release, ‘Compositions by Jon Steele, Vol. 2,’ but also what’s to come within the next year, ‘The Beginnings of Jon Steele.’

Steele went above and beyond with 19 on 2017’s ‘Compositions by Jon Steele.’ With his 2019 release, he scaled it back to 12 but has major plans to release an album featuring 22 songs that will showcase not only Steele’s vocal talents but his drum skills as well. Each track will reveal more and more about Steele’s beginnings and how that all came about. Rightfully titled, ‘The Beginnings of Jon Steele,’ the album will be out within the next year.

With his background in the Air Force, Steele has taken influence from the years he’s served and penned a handful of tracks about the military including “In A Soldier’s Stance,” “Power Source,” “A Journey with a New Connection,” and “Universal Soldier.” The last being about a soldier that was built by the military, the universe, and the gods. And how that soldier then grows with time and is continuously enriched by mystical and mythical journeys.

Steele creates music that connects to not only those who have served their country but those who are fans of solid pop-rock. People who love upbeat music that the likes of John Mellencamp and Bruce Springsteen would deliver.

Those interested in adding new pop-rock to their playlists, reviewing his latest ‘Compositions by Jon Steele, Vol. 2,’ or interviewing Jon Steele about what’s to come can reach out via the information provided below.

About:
Music became a passion for Steele over two decades ago. He was only 16-years-old when his interest in composing started, but it took a couple of years before he started to write songs and come up with lyrics of his own. Several years later he dropped his debut, ‘Compositions by Jon Steele.’ Since then he’s released 2019’s ‘Compositions by Jon Steele, Vol. 2’ and is currently working on his next record; ‘The Beginnings of Jon Steele.’