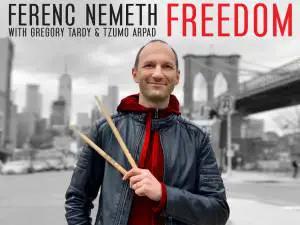 Hungarian, Ferenc Nemeth pulled from folk music rooted in his upbringing as well as classical sounds, electronic, and music found all over the world, including African, Brazilian, Afro-Cuban, Middle-East and Eastern Europe talk about freedom, hope and renewal or rebirth. All of which came together beautifully in a jazz shaped package in the end.

Of course, nothing in life is that simple. When creating ‘Freedom,’ Nemeth knew using that title would spark some conversation as the world we live in is ironically encased in the idea of freedom. While we have more possibilities than ever today, Nemeth notes, “There is still racism, hate, there are still wars in some parts of the world, terrorism, people are still suffering and many people simply don’t believe in themselves so they can’t break out of their limiting beliefs.”

The tracks on the album are each unique and have their own story to tell. From the sorrow of leaving loved ones behind for good in “The Fugitive” to a simple boy suffering physical and emotional pain in “FarmBoy” to the reminder that people can achieve anything with enough faith in “Dare to Dream,” each track breathes its own truth and develops old favorites like “Peacock.” An old Hungarian folk song with lyrics of freeing the slaves, the idea that tomorrow will bring new winds, new hope, and our belief will become our reality is brought into modern times sans the lyrics but the heart remains.

‘Freedom’ features 17 tracks and is like a double album in that it features regular tracks, as well as tracks that showcase only Nemeth on the drums. With Nemeth on percussion and vocals, Greg Tardy on the saxophone, Tzumo Arpad on piano and keyboards the instrumentation is very particular as there is no bass player, and it’s the first time Nemeth can be heard singing, using a vocal harmonizer.

“This was particularly a new experience for me, especially since on the title track I am doing a duo of percussion and vocals. I am very excited about the result as I feel like I’ve created something new sonically as well as structurally. With the vocal harmonizer I am also bringing more colors because I am not only singing melodies but also creating new sounds that became part of the music, and adding more layers as well that takes the music to another level. It gives me another way to express myself as I am also interacting with the musicians not only with the drums but also with the harmonizer.”

New York-based today, Ferenc Nemeth was born in a small village with no more than 1,000 residents to its name in Hungary. Music became a part of his life early on, and not too soon down the road an encounter with legendary vibraphonist Dave Samuels changed his course as he encouraged him to head to the US and attend Berklee College of Music. So he did, and like a fish out of water – Nemeth was of course taken aback by his new surroundings but soon found his footing as he connected with his mentor to this day Hal Crook, Gary Chaffee, Bob Moses, John Abercrombie, and many others including Herbie Hancock and Wayne Shorter who he worked with on Lionel Loueke’s debut on Blue Note. In 2003 he relocated to New York City and began releasing music.

Since then he’s released a handful of albums including his US debut, ‘Night Songs’ which featured John Patitucci, Mark Turner, Chris Cheek, Lionel Loueke and Aaron Parks. He then followed that up with ‘Triumph’, Featuring Joshua Redman, Kenny Werner, and Lionel Loueke and nine other woodwind instruments, as well as a vocalist, “Triumph” showcases the true triumph of a creative collective as the woodwind arrangements were written by Nicolas Sorin; who also does arrangements for Miguel Bose and other great artists.

Nemeth feels as if ‘Freedom,’ in many ways, is a continuation of his previous releases because of the absence of bass and the folk melodies. Nemeth is also the founding member of GilFeMa which is a collaborative trio consisting of guitarist Lionel Loueke and bassist Massimo Biolcati for the past 20 years. In that time he’s also created a drum learning app called Drum School that has revolutionized the way people learn to play drums. Drum School is available in the AppStore and GooglePlay Store.

‘Freedom’ will be available for pre-orders on iTunes, as well as streaming on Spotify, Apple Music, and other digital service providers.

Those interested in featuring new jazz on their playlist, reviewing ‘Freedom,’ or interview Ferenc Nemeth can reach out via the information provided below.

To download a free track from the album and to learn more about Ferenc Nemeth, visit: http://www.ferencnemethmusic.com

About:
Ferenc Nemeth was not alone when it came to his new album, ‘Freedom.’ A group effort was put forth by himself, along with Greg Tardy (sax), and Tzumo Arpad (piano/keyboard).