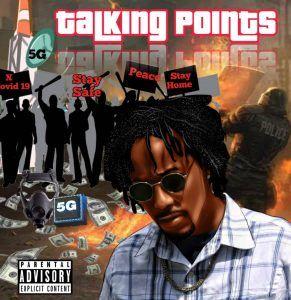 Alexandria, Louisiana – April 30, 2020 – Since hitting the mainstream in the ‘80s, rap music has become the most influential of all the genres. From the obvious influence on music as a whole to vernacular, fashion, and culture; rap is ever-present in society on an everyday basis. However, it is very unfortunate that the quality behind what denotes a great recording artist has somewhat slipped away from the eyes of the public. One such artist that is trailblazing his way to bridge the gap between the idea of good music and the production and distribution of that music on a mainstream level, is none other than Don Thomas aka Don T.

“It is for those that listen to lyrics and reflect upon past events, the ones that believe in signs and wonders, and these bars are for the people that just want to hear some real rap, plain and simple.” – Don T on his music

With sincere lyricism, this 33-year-old creative maintains a fully charged arsenal of high octane music that supports the fact that he is the truth. And the proof is displayed for all to hear on his latest string of releases in 2020 that include “Money Ova Everything,” “Close Friends,” “My Type” which has over 50k streams and counting on Soundcloud, and his latest release of the year, “Talking Points.” In his latest single Don T collaborated with Willie Walker BH. He dives right into a conversation as he refers to past acquaintances and how they cannot relate to his vision of progression due to their bad life choices.

Inspired by the likes of Chuuwee and Kevin Gates, Don T wanted to say something substantial with his lyrics. He didn’t want to just spit bars for the sake of entertainment. He set out to make thought-provoking material and give the world of rap something to grasp onto. Currently, Don T is balancing his time as a single father and rapper with serving his community during the COVID-19 pandemic working as an instacart shopper. Knowing that some aren’t lucky enough to be able to go out for their own supplies, he’s working to ensure no one is left without during these nonideal times.

About:
Over the past decade, Don T has performed at several independent artist showcases including The Player’s Ball in San Antonio. He has also been featured on the likes of EDM House Network, Skilly Online, and a handful of FM dials and internet radio stations. On top of being an independent artist, Don T is also an entrepreneur. Since launching Wise Guise Entertainment on his own, he’s managed to connect with other independent companies such as Street Dreams Ent, From Locs With Love Housekeeping, Makin’ It Mag, and Industry All Access. When he isn’t running his business or recording new music, Don T has a myriad of other ventures and talents; from designing shoes for Aliveshoes’ Nomad Urban Footwear Collection to acting. So far he’s hit the small screen on ‘Queen Sugar,’ ‘Unhinged,’ ‘Claws,’ ‘NCIS: New Orleans,’ and many more.