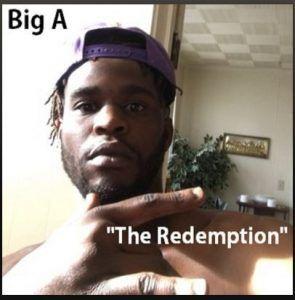 Baton Rouge, Louisiana – April 10, 2020 – Life isn’t perfect, that’s the truth. One Big A knows all too well. After suffering the loss of two of his loved ones, he’s managed to find the strength to push forward and deliver not only for them but for his six children on his debut, ‘The Redemption.’

Nine songs deep, ‘The Redemption’ delivers well-polished beats, impeccable lyricism, and overall great performance from Big A. The Louisiana-based rapper gives his all on every track from “Told Me Team We Gone Win” to “Come Around When You Got Something” to “The Real Ain’t Hard to Find.” Every track is a seamless addition to the album, and every track holds its own against the one that preceded and follows it. Fans of classic hip hop will appreciate what Big A is putting out because they will be able to hear his tenacity and drive.

A drive that has only gotten stronger in recent months as Big A had to say goodbye to of his own. He lost not one, but two of his brothers two months apart from one another. It’s never easy to lose a sibling, let alone two in such a short period, but Big A has found an inner strength and is putting all he has into his music to ensure their memory lives on, and that he can provide for his six children. All of which he raises alone.

‘The Redemption’ is Big A’s debut album, and available on all major streaming and online platforms; Spotify, Amazon, iTunes, etc.

Those interested in adding new hip hop to their playlists, reviewing ‘The Redemption,’ or interviewing Big A for their podcast, site, or radio show can reach out via the information provided below.

For more music from Big A, please visit: https://open.spotify.com/album/5Vkni3sGa30Cc70dUadlN0

About:
Big A presents his debut, 2020 release, ‘The Redemption.’