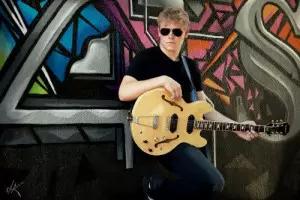 Jimmy actually started drums at an early age and discovered the Beatles and other bands of that era. Soon after, he started playing guitar which opened a new musical world. Cream, Jimi Hendrix, the Doors, the Blues Breakers became the musical foundation for him as he started his first band, “The Silence” and then his power trio “Jax.” His guitar mentor, “Fast Freddie” Rapillo has been working with Jimmy for a number of years. After watching a Buddy Guy/Johnny Lang concert, Jimmy was inspired to form a professional band of seasoned musicians with diverse musical backgrounds and experience. Blue On Arrival features Gary Swan – keys, Jon Fowler – producer, Melvin Brannon – bass, David Daniel Diaz – drums. This release is different from the Jax Trio stuff but really just a step higher into more mainstream rock and blues, combined with a rhythm section that doesn’t get any better, and a lot of piano and horns for a jazz school touch that magically bombards the senses. “Murder” is the lead off barnstorming affair that comes complete with solos, particularly from Dan Reed Network bass play Melvin Brannon. Hot stuff cooks and outright fries the melon from first to last second. I put it up there with some of the best playing around. This band are big on soul, as you hear instantly hear it pulsating. A round of applause for coming on so strongly at the outset. What a bone crushing opener that goes a long way as it is, with so long to go. It’s like getting the fresh wind knocked out of you. A mean harmonica is blown all over this. If that isn’t tasty enough, perhaps “Hit My Stride” is the ticket. They both are as far as this reviewer is concerned. I can’t fault one thing about this gem either. It’s a polished little treat with a snazzy wrapper. It just keeps grooving along as it bubbles with a soothing edge. This has hit written all over it. I really get off on it the most, but there isn’t any part of it where I don’t. These are all good tracks that compel to a strong degree. If you’re a true blues lover and don’t recognize any of the chosen covers, you will be glad to hear “Crossroad Blues” get a good workout as it succeeds at changing the mood to a more serious one. You can’t turn this down at any rate, it’s great. And that is three for three so far, which has me hooked as usual. I have to admit I listened to it twice in a row the first time I heard this CD. They just keep rocking steady with the sophisticated appeal of “Rock Me Down,” which is another winner. Talk about getting around, this does the uber-biz. There are several slow grooves and this is one of them. They all do their best work on these slinkier tracks. But the taste never lets up anywhere, to be honest. The message here is don’t mess around. And it makes good sense to take a good break in the action and bring on a brooding ballad that takes Jimmy into more of an adult contemporary shade on “Poison,” which isn’t the only spot where he does this. The consensus is he does it well, as he smokes on this with pure confidence. By now you get the feeling there are no fillers here, and no second rate talent to be had either. The guitar playing and harmonica mix together hypnotically and send a chill up the spine. This is worth the whole experience. The same heat continues but with more volume applied on “I Can’t Stop,” and stop it does not, as he squeezes even more juice out on this hell of an effort. Hot to trot blues of the roadhouse sort if I ever heard it. This is extended by the next tune which gets back into the same tone as described previously, with a folkish vocal touch this time. And there is nothing wrong with that, as he gets away with more than one theme without weakening the blues rock structure any. Great stuff. And if that doesn’t float your boat, “Best I Could” just might help with that. It’s generally more of the same but the horn delights and extends the mood which gives it an overall classy feeling, which is particularly breezy. If you like piano and jazzy inflections in your blues, this is for you. Jimmy proves his chops all over this, just and he does on the other tracks but probably puts in his overall best into this, which suits the title as well.

Your opinion might vary, but I’ll take the final track right along with the rest of them. This is another point where I hit repeat before starting the whole thing over to get completely wrapped up in a great album with all great backing turned in around this uprising youthful but old soul of an artist. “Stuck In Glue,” is a diversion piece that wastes no time before it’s over. Not a bad way to end a very good album that could only stand to benefit from more songs, preferably more originals. Anyone would agree by the time they get through this and left wanting more.