Who The Hell is OjOutLaw

Dan O’Brien is the founder and lead singer, arranger, and songwriter of the OjOutlaw band in Melbourne, Australia. Started in Rap/rock and grunge outfit “Demo Dee” as lead singer and keyboardist in the late ’80’s. OjOutlaw formed in the mid-nineties as a garage punk rock band and developed into an electric style rock project towards the end of the nineties. Into the 2000s, the OjOutLaw band evolved into a hard rock outfit, releasing iTunes albums MEGAPHONE DIPLOMACY in 2009, HELLBOUND 2011, LAST LEGAL DRUG in 2012 & MOJO SIDE EFFECT in 2013. This year, OjOutLaw has fully remastered and reissued their entire back catalog including a dozen previously unreleased, early studio tracks and rare recordings on each release.

Mojo Side Effect captures OjOutLaw at the height of their symphonic pop-rock grandeur without losing the trademark arrogant sarcasm rock swagger. Mojo Side Effect has been remastered in 24bit from the original studio recordings and reissued with additional unreleased studio tracks dating back to 1999.

The clash of “new found freedom” and “Identity Loss” that is inherited from a breakup and a breakdown.  The polar follow up to LAST LEGAL DRUG (2012) about sex and obsession.  Dan O’Brien: “I thought the title was apt, Mojo Side Effect” is the effect of commercial or status like infliction of strangers and fans obsessing over the idea of who you are, yet those closest are negatively impacted.”  The idea of “Boy Meets Girl” turned on its head and twisted out of joint.

The writing is a personal purge and cleansing, revisiting and casting out past demons, The album was lyrically a tragic exercise in self-destruction and relationship dysfunction, before releasing the album, we revisited the recordings and added some light to the project for balance and “cock rock” humor. The album centers around a lost city rock singer battling outdated public perceptions, past regrets, and personal oddball life challenges.

I have written 12 new tracks and working through a new concept album for early 2022.

Thanks for an awesome interview, OjOutLaw 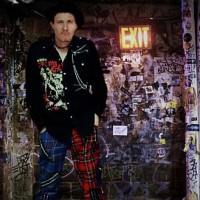