My name is Kathleen Spencer. I like to go by Kat and my band’s name is Katsember. When I first started this unexpected journey I had no idea it would take me to where I am now. My first memory of music was learning piano in Fairbanks, AK on a small Casio keyboard. I had a good ear but wasn’t taught how to read music until moving to Vancouver, WA when I was 9 years old. I took piano lessons until I was 18 and also played the flute in the band, starting in the 6th grade. I’ve always loved to sing, but aside from a few talent shows in school, kept my singing voice private.

After I stopped taking piano lessons I discovered that I could compose. Up until then I never knew I could, don’t even remember trying. It started with my song For Amy, which was dedicated to a fellow piano student of mine who died in a car accident before she was 20. Every song I wrote after that was unplanned and unexpected. My first 12 songs, on my album Explorations, were each written one measure at a time, simply by sitting at the keys and writing down each melody that my fingers found. I don’t typically hear anything ahead of time. My fingers simply would play something and I would write it down, note for note.

My first album was released in 2002 and just for fun, I created CDs, just for myself. When YouTube started, I put a few videos together with beautiful pictures that went with my relaxing piano music. Unexpectedly, I started receiving praise and questions about whether I had sheet music. Not only was I now selling CD’s, but people wanted sheet music. Something I didn’t even have for myself. I created single sheets as well as a book and started selling them on Amazon.

I wrote a few more piano solos and released Boundless which included 3 new songs, Boundless, Season’s Journey, and July. Ember and Transcendence came shortly after. A few years ago I sat down at the piano and started improvising. I created my latest piano solo album Improvisations by Katsember in less than 2 hours.

In 2010, I started composing songs with lyrics and my singer-songwriter career began. I was born in Fairbanks, AK and up there I never suffered from allergies. But after moving to Vancouver, WA it seemed I was now allergic to the earth itself. I suffered from horrendous allergies from 9 years old until the age of 30 when I decided to start allergy shots. They changed my life! I was suddenly able to live like a normal person, symptom-free. This new-found freedom allowed me to become a runner, which I love and I’ve run a marathon and many half marathons and smaller races. Also, when the constant sneezing and congestion cleared I found myself singing more. I always loved singing, but trust me, the allergy queen could never have been one.

My voice has been compared to Stevie Nicks, Alanis Morissette, Natalie Merchant, and Adele. And my style is inspired by the greats as well as newer groups like Augustana, Counting Crows, and other Alternative Rock groups.

On June 28th of this year, I released a total of 5 albums. 2 new albums Sands of Time and Dare which include 24 new songs. I also released a compilation album of all of my piano solos, The Katsember Collection and 2 soundtracks for the novels The Light of the Blue Pearl and The Black Ruby.

My first singer-songwriter album, Burning Flames was released in 2013 and included 12 songs. I have been writing more songs for the last decade and started recording and producing my next two albums Sands of Time and Dare 2 years ago. There were 23 songs when I started, one month before I finished the albums, I was inspired and accidentally wrote one more. Each song tells a story and was influenced by something I was going through.
https://soundcloud.com/katsember/albums

Before allergy shots, I couldn’t have dreamed I would be a singer. I loved to sing but I lacked confidence. Then one day someone told me they loved my voice, my confidence to sing grew and the rest is history. My songs are inspired by my life experiences. Love, loss, and everything in between. They are emotional, heartfelt, raw, and honest. I went through a very difficult decade during 2010 and 2020. Losing my income, my husband, my mother–in-law to cancer, nearly my home, and life as I knew it. Writing these songs got me through a very difficult time.

I record everything in my living room on my baby grand that I bought on Craigslist for $2000. At the time, we were financially strapped and couldn’t afford it, but it was always my dream to own a baby grand and it is unheard of to find such an amazing piano for so little. My gut told me to buy it and so I did and have never regretted it. My first album, Explorations, was composed and recorded on a digital upright. All of my recordings now are recorded on my baby grand. Everything is done on my own, in my home studio, the songs were completely written and composed by me except for the drums and the bass. I started by recording the piano and then added vocals, background vocals, strings, and then finally hiring a drummer and adding bass. It was a huge undertaking tackling 24 songs . . . and a huge feeling of accomplishment to finally be done.

The mixing and mastering of these two albums were done by myself and an amazing musician/bass player friend of mine, Andrew Kallenberger. It took us nearly a year to complete this process. It is my hope to get these songs placed in TV and film. My first song that was placed on a TV show was my piano solo Season’s Journey and was included in Season 2, Episode 1 of Dance Moms.

I did release one music video for one of the songs on Sands of Time. It was released prior to finishing these albums and I will be re-releasing it again with the newly mixed and mastered song. But here is the original version and links to the releases. I also released 3 music videos for my first album Burning Flames.

I don’t plan on touring just yet, especially with COVID-19 happening. But now that these albums are done, I would like to play locally. I have performed at The Buffalo Gap in Portland, OR. https://www.youtube.com/watch?v=FLM4BEqcyTU

And I hope to have a release party this September if COVID will allow.

I have worked very hard at branding myself. From creating my band name Katsember (Kat plus my song Ember), to carefully creating eye-catching artwork for my flyers and CDs and business cards. I have created my own website and have a growing fan base on YouTube, social media, and Patreon.

I listened to and was greatly inspired by Dan Layus of Augustana for a good part of this last decade…more recently Brendan James, Scars on 45, Toby Rand, and Kaleo.

My children are my biggest passion. I have 2 beautiful kids, a girl, and a boy. They inspire me every day (and have learned to play my piano songs!) and I am trying to be the best mom ever. I also love to run and exercise in general. I am also a writer and have published 2 novels. I love creating. And I love helping others get their creations out into the world. I do a lot of freelance work to help authors and musicians to get their work out there.

Honestly, publishing 5 albums on my birthday was huge and I’m exhausted. I would like to take a small break to rest my brain and then I will be working hard to share what I have just done. I hope to network with many in the industry and get my music into TV and film.

I will be building my online business to help other artists and marketing my own creations. It’s a big job. Oh . . . and, of course, being a mom…first :)

I also work part-time in the ER registering patients.

Thanks for an awesome interview, Katsember 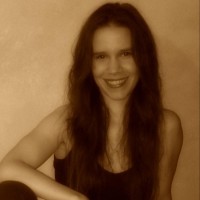