We are a family band of 3 sons and their dad. We started this project as a fun hobby trying to write and record a one-day album where all the tracks were written and recorded in a single day back in the summer of 2018. We had so much fun doing it and thought we had some pretty decent ideas that we would create an album from it. The result was our debut album, ‘The Last Days of Summer’ which is actually a double album. We had so much material we couldn’t limit the songs so we just went big! All of us love classic rock and have a love for all forms of rock music so that really is our influence, but we each independently write our own songs so our album has 4 very unique styles of music on it. We are learning about the post-production process still and need to keep improving our mixing and mastering skills, but the songwriting just pours out from us and we love it. Each band member will play piano and guitar on various tracks, and if you wrote it, you sing lead, but Jimmy is probably our best lead guitarist and does most of that work. Ultimately though it is just about a love of music and the creation process.

‘Songs for Emylia’ is our latest album just about to be released. One of the siblings not in the band introduced the first next-generation Pierce to the project and her name is Emylia Grace. She is a beautiful and vibrant girl and we decided to dedicate our album to her. A couple of songs are very playful, and one a straight up lullaby to her, most songs are actually a bit darker in tone than from Last Days of Summer. We have matured as songwriters a bit, and the production value is much better. Obviously doing only a 12 track album allowed us to focus more time and attention on each track and work out more details. We think there is something on this album for everybody.

This is a passion for us. Love, family, unity, and bonding all matter greatly to the Pierce Project. We’ve been moved to continue to create as the creative process is the greatest experience we share. The next generation Pierce, Emylia, has brightened our day and our world so much that we had to have this album dedicated to her. As we pull from different genres of music, we continue to try to find our own style and sound but incorporate some old school rock as well.

Writing and recording are tough sometimes. Jimmy goes to graduate school in L.A., Luke just graduated high school and Nick is a Junior while Joe owns a company that is necessary to fund this entire adventure. Getting us all in the same room, or on the same schedule is difficult. Each of us writes in our own way…usually starting with the music. A chord progression, a theme, something that grabs our attention and moves us to advance it a bit more. We will call on each other to help if we get stuck, but then sometimes it is just a phrase that opens up the song lyrically. Once that first inspiration is achieved, it feels more like finishing something that was already written. There is, at least for me, a feeling like this is the way the song is supposed to go. Nick is very creative in introducing different sounds and layers to the music and Luke always looks for challenging chord progressions to create different sounds. Jimmy best understands the way a song is supposed to sound and has an exceptional polish to his writing. In the recording, it is really effort, effort, and more effort. We will do take after take until we get something right, and then not be afraid to go back and do it again if we need to. We will record more than we need and pair it down rather than not have enough.

There are no plans to hit the road at this time. We are all busy with other activities, but we have discussed it. Let’s see how this release goes!

Honestly, we don’t try that hard. To us, the music is king so either we are creating good content or we aren’t. We will do some social media posts, try to get some attention on the submit hub and other sites. We did get some good college radio play for our last album and may have our songs put into some TV and Movie slots but this is really building up to this album. We will need to work much harder to get our brand and sound out to the public at large with this release.

Lately, it has been a mix of the Beatles and Hamilton and Les Miserables. I’m partial to classic rock as are the others and recently Queen, Radiohead, The Kinks and Pink Floyd have all been in the mix. Nick has also been learning “Time in a Bottle” so Jim Croce is in the mix. There is a lot of love for all kinds of music and styles.

The Beatles for sure. The Beach Boys have a strong influence as does Pink Floyd. We love the Kinks and Rolling Stones so basically all the greats of classic rock. I’m partial to the Black Crowes as well, and the J. Geils Band. Also Cheap Trick and The Police have made an impact on what we do.

Each of us has different loves in life. For Nick, outside of music, it is basketball. Jimmy is the creator of his own card game called ‘Champions’ and he is currently building an online platform where anyone can play. Luke…well Luke has a new girl so that takes up all his time, to be honest. Joe is too busy working to keep paying for this hobby!

We are going to be pushing this album! We are very excited about it and we love every track on it. Then it is on to our third album for which we already have an abundance of material.

Thanks for an awesome interview, The Pierce Project

Connect with The Pierce Project 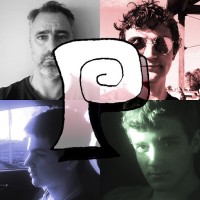