My name is Ritchie Randall and I’ve been playing guitar for about 30 years now. I’m in a metal/punk band called Gravehuffer. James Hiser is on the mic, Mike Jilge supplies the bass, and we got a new drummer this year named Jay Willis. We’ve been around since 2008, have released 2 full-length albums, an EP, and are currently recording our 3rd full-length album for NoSlip Records. It will be released on vinyl this fall.

Our most recent release is a 2 song EP released on vinyl through NoSlip Records. It was released on Friday the 13th this last September. The 1st song is called Demon Face and is about Edward Mordrake. He supposedly had a face on the back of his head. We wrote the lyrics from his point of view and the music builds in intensity as his life was more distraught with each passing year. The 2nd song is called Stalingrad’s Cross and is about the Battle of Stalingrad from World War II. The lyrics are told from the point of view of Germany’s & Russia’s soldiers and finally the aftermath from a civilian point of view.

Real life events tend to be our biggest inspiration. It seems that the world is in quite a distressed place now, so that definitely comes out in the music. As far as the subject matter, our singer is a history buff and always wanted to write a song about the Stalingrad Battle. The Edward Mordrake idea was mine, but James took the idea and ran with it. He has several English majors in his family so that rubs off on him as well. He wrote some great and thought provoking lyrics for both songs!

As far as the writing process, it usually starts with Mike and I just jamming together and seeing what comes out. That was definitely the case with both Demon Face and Stalingrad’s Cross. We had about 75% of the music written and then took those parts to practice and came up with the rest with our drummer at the time, Kasey Denton. James heard the Stalingrad’s Cross music and immediately was inspired by the marching sound of the music to write about a battle. We recorded both pieces as a demo and James took that and wrote his lyrics. We worked on it for a few hours together and both songs were pretty much ready to record. We tried recording at a professional studio but the engineer was cutting and pasting parts together and we just weren’t satisfied with that approach, so we decided to record it ourselves. Mike our bass player set up a studio in the upstairs room of his house and we recorded the 2 songs in a couple of days. Our friends Kevin and Sean from the band Sardis laid down some killer guitar solos for Stalingrad’s Cross and Mike commenced mixing it. NoSlip Records were also a catalyst for releasing it as an EP. They were interested in working with us but wanted to test the waters first with a smaller release. Needless to say, it’s been a success for both of us and they will be releasing our full-length album later this year.

Yes. We currently only have a couple of shows booked now but are just starting to get the ball rolling again for playing shows in 2020. The 1st show is here in Joplin at Blackthorn with our previously mentioned friends Sardis and Kossatot from Fayetteville Arkansas. We also have a show on March 28th at The Boobie Trap in Topeka Kansas with our new friends Turniphead and more TBA. We’ve already submitted to play a handful of American festivals and are also planning a week run with Summoners Circle from Knoxville Tennessee.

Our sound is pretty varied and we can play shows with bands ranging from death metal, thrash, hardcore punk, and grind,  to sludge, and doom. All of us have quite eclectic listening tastes and it shows in the music. We’re not really concerned with fitting in or being cool, we just want to jam with everyone we can and have a great time doing it.

Black Sabbath, Judas Priest, and Deep Purple started me on my path, then it was Metallica, Morbid Angel, and Ramones.

I love music of course, and I am married to my wife Bianca for 19 years. We have four amazing boys: Zack, Devin, and twins Max, and Jake. My family means so much! They are very supportive and we all appreciate each other. They all are into music as well and have or are currently playing an instrument. I love art as well. Everything from drawing, painting, sculpting, and photography.

Thanks for an awesome interview, Gravehuffer 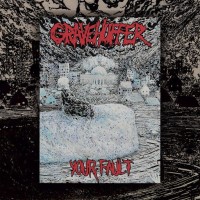