I grew up in a musical family (my parents were classical musicians). They encouraged me to play but didn’t push me in any particular direction. I took guitar lessons, folk, music fiddle tunes and the like. When I was about 11, I heard Duane Allman playing slide and I was hooked. Because of my background, I listen to everything, rock, jazz, blues, country, funk, fusion, but playing, I always stayed close to roots/Americana.
By the mid-eighties, the only music getting played was either Hair metal, New Wave or Dance stuff. I got away from playing for quite a while, years, in fact. Then I heard Derek Trucks. I swore Duane had never died and just had been woodshedding somewhere!
And then I rediscovered Sonny Landreth’s playing (who I had seen with John Hiatt’s band). Soon after, I tracked down some of Danny Gatton’s recordings. Hearing these guys sort of jump-started my musical brain. I had the good fortune to be able to spend some time with Sonny a few years back. He’s an incredible teacher and the quintessential Southern Gentleman. My focus has been on the slide ever since.

I had been playing in a couple of bands again, but really wanted to have more control over the project. As fate with having it, between gigs and some session work, I found players that I knew would be a good fit for my material. I mean, just listen to how Joey and Rick lock into the groove on “Mean old Fireman”. They make a pocket so deep you could launch a SpaceX mission out of it. Our debut Album, Box 1, was released in August and can be heard on our page at Soundcloud.

I’ve been writing material on and off for a long time.  I found ideas that would pop into my head at work a lot. My “day job” is as Firefighter, so I made a habit of bringing a cheap travel guitar and leaving it on my bunk. If I had some downtime, I’d hash out what was in my head and make some notes or a quick recording on my phone so the ideas didn’t fade into oblivion.

My inspiration comes from everywhere. “Through the notch” is a great example. I used to work a second job fixing 2-way radio equipment in Northern New England. Lots of times, I’d finish service calls early and go skiing in the afternoon. One morning, I drove through Franconia Notch in a snow squall. Right when I got to the Northern end, the sky cleared, the snow stopped and the morning sun lit up the valley like I’ve never seen it since. The first phrases of the song popped in my head.  I kept singing it to myself all day, till I could write it down.

Some tunes, like “On your Marc”, came together very deliberately. Marc Athlan, is an amazing slide player from France. He’s one of those rare players that is wonderfully melodic and technically groundbreaking. He’s been a huge inspiration for me. I had been listening to some of his phrases and a series of ideas developed. I wanted to consciously use similar techniques, as a tribute, but not copy his licks. The process, at first, was more deliberate. I built the key phases, constructed the chord structure and hated the result. It seemed too forced. I improvised over the changes a few times and came up with a more flowing melody.

Some songs write themselves.  “Hogg Wild” was one.  I was loosening up one morning the day before a session and the “A’ section came together in about 5 minutes. The “B” section is a stereotypical circle of 5ths  progression common in swing and bluegrass, just speed up to hyper-caffeinated, warp speed. It took me longer to write out the chart than to come up with the idea. I emailed them to Joey and Rick. We recorded the rhythm tracks the next day.

Where I’m writing, playing and producing the material, I generally have a pretty solid concept of where I want to take a song. We are very fortunate to have a studio available (The Bridge Sound and Stage) with an incredible live room. We’ll set up the drums in the main room and put the amps in isolation. It gives us the feel of playing live and the control over the sound.  Because of the amazing room sound (and our Engineer, Alex Allinson’s ability to utilize it), there’s very little processing on the drum sounds. It’s all Joey, the drums and the room.

I strive to keep an organic sound and feel to the recordings. I want to be able to reproduce it live.  I’m a stickler capturing a wide variety of tones, whether electric or acoustic.  I want the music to sound like musicians playing instruments, not tones being spit out of a machine.

Getting all the moving parts to line up is always a challenge for any band, and we’re no exception. We’re currently working on booking a series of short tour legs in 2020.

We’re constantly balancing keeping an organic sound with sounding fresh. Where we have a heavy instrumental focus, we strive for an energetic delivery that showcases great musicianship. People still like great music, we aim to make the energy infectious.

There have been some great new releases from some of our friends, like The Melody Trucks Band and Lady Lupine. After hearing of Paul Barrere’s passing, I’ve been on a Little Feat binge.

Well, Duane got me hooked on slide guitar. Sonny Landreth and Danny Gatton are probably the most evident in my playing. Steve Morse has always inspired me, as far as writing. I love how he’ll mix and match sounds and feels from different genres. Hey, boundaries are for conformists! Really, everything I hear influences me somehow.

I’m really grateful to be in such a great place in my life. I have a job where I get to help people with what is often the worst day of their lives. Our department has gotten a lot younger and I enjoy the responsibility of getting the younger members up to speed on a job that takes a career to learn. It’s been said many times: “The most important thing an old firefighter can teach a young firefighter is how to become an old firefighter”.

My wife is starting her own business and there are always projects to help her out with. I love working with my hands, so when our 150-year-old house isn’t keeping me busy, I love building or fixing guitars and my gear.

There’s a belief that misery inspires great music. It can, and certainly has for many people. I think being in a good place can be just as inspirational, and you can be a heck of a lot more productive when you’re not walking around with your head down and your tail between your legs!

Well, winter’s on the way and I need to insulate my wife’s home office. As  I mentioned, there’s a video project in the works, dates coming up in 2020 and we’ll be back in the studio later this week to start on more new material.

Thanks for an awesome interview, MEAN OLD FIREMAN & THE CRUEL ENGINEERS 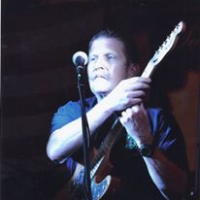