Singer/songwriters James “JP” Connell and Reid Spencer reunited after 40 years to form the James Reid Band, which is heading to the studio this year to produce a second CD, titled “Tales Tall and Tender.” Connell and Spencer, along with guitarist Matt Kastner are alumni of the original country-rock band Milkweed, which attracted a large, loyal following in Atlanta in the 1970s and opened for the likes of The Allman Brothers, Jimmy Buffett, Jerry Jeff Walker, Wet Willie, Al Kooper, and John Hammond Jr. The new CD, scheduled for release in late 2019, will feature original compositions by Connell and Spencer. Here’s a sample of their work titled “Homeless Paradise” from the James Reid band YouTube channel, a live-performance recording from the band’s April 2 concert on Orcas Island.

It was by mere happenstance that Connell and Spencer, former classmates at Yale, reunited after losing track of each other for 40 years. Before Connell rediscovered Spencer on the Internet, both had established careers outside of music, Connell as an educator and Spencer as a sportswriter. 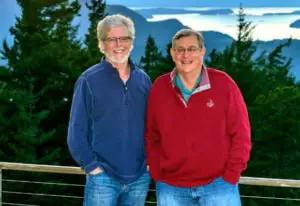 “We not only rekindled our strong friendship but also rediscovered our love of music through the collaboration that brought us together in the first place,” Spencer says. The songs we wrote in the 1970s are still fresh today, and the ones we’re writing now express a depth, maturity, and level of experience we didn’t have as 20-somethings.” For the full story of the reunion and formation of the James Reid Band, click this link to the JRB website: http://www.jamesreidband.com/bio

The James Reid Band’s first CD, “Breakfast at Sunset” (released in early 2016) is an eclectic mix of genres from rock to country rock to smooth jazz. With the addition of Russ Blake on pedal steel guitar, Brian “Boss” Hogg on saxophones and Lauren Schloemer on violin, the band’s second CD, “Tales Tall and Tender,” features a more cogent, consistent sound and vision from the songwriting partners, who will share lead vocal duties on the recording. After the April concerts, the band laid down the basic rhythm tracks, along with sax and violin solos, at the Bredouw’s Barn recording studio on Orcas Island. Vocals and additional overdubs are scheduled for late summer/early fall.

The new James Reid Band CD, “Tales Tall and Tender,” will feature 12 original tunes by Connell and Spencer in an idiom the two songwriters like to call “country jazz.” The CD already is in the works, with an expected release date in late 2019.

Pick up a copy, download or stream of the James Reid Band’s debut CD “Breakfast at Sunset” here: https://store.cdbaby.com/cd/jamesreidband

The James Reid Band was formed in 2015 through the reunion of singer/songwriters James “JP” Connell and Reid Spencer, who performed together 40 years earlier in the original country-rock band Milkweed, described contemporaneously as “America before there was America; the Eagles before the Eagles.” Connell and Spencer Spencer have assembled a tight corps of world-class musicians with whom to record and perform their original songs. The band can be seen and hear on Youtube here: https://www.youtube.com/watch?v=ksMZvAJH5CQ